Adele Vs Gaga... I pick Adele! 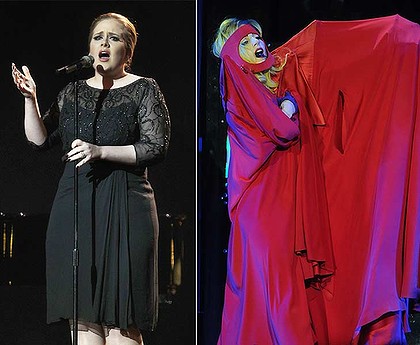 OK~ who will beat that Lady Gaga gau gau(badly)? Definitely not Kathy Perry, but is Adele. Adele has proven that she outsold gaga by huge margin (in term of worldwide sales, 10 million copies vs 5 million copies)! Clap please. So, Gaga’s supporters, known as 'little monsters' now seem to be living up to their name by making catty jibes about Adele's weight.

Guess what? The little monster said, “Confirmed: Gaga will not be wearing her meat dress because she is afraid Adele will eat it.” How shallow!

These 'little monsters' habitually attack and deride Adele for her weight, while at the same time they weep and moan about being freaks who are bullied by society or something to that extent. So, they complain they are being bullied, and at the same time they viciously, cruelly and remorselessly bully Adele for her weight. So? Besides the weight issue, what else they can use to attack Adele?

Gaga once said, ''The biggest misconception about me is that I am artificial and attention-seeking, when the truth is that every bit of me is devoted to love and art''. Hahaha… very funny indeed.

As for Adele, she's like the new Amy Winehouse but minus the drug issue and personally. Adele's music is universal, whereas Gaga's music is made for one set audience.

Adele's continued success just shows how people are starved for real talent. You can go live in your fantasy world and pretend that she will be forgotten while the rest of us will laugh at you, just like we laugh at the idiots who thought Adele would be forgotten when her incredibly successful album 19 came out in 2008 (which btw won her two grammys). Also, this years Grammys, Adele is going to be sweeping up all the awards. So Gaga, what else you can wear to impress your little monster?

Shall I say this – those who adore adele might have better taste than those little monsters? Seriously, based on what I observe from my own world. It does prove that Adele fans are way more well-cultivated. Sorry, call me shallow or what, this is what I seen and experienced.
Posted by Anthony at 25.11.11